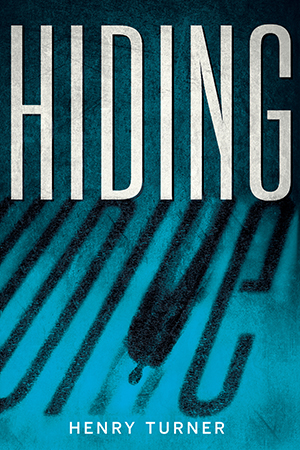 What are they trying to conceal?

When a teen boy who excels at being unseen finds himself hiding in his ex-girlfriend’s house, he uncovers carefully concealed truths—about her, her family, and himself—in a twisty mystery with a shocking surprise.

KIRKUS REVIEW A teen boy who excels at hiding must figure out the secrets of a seemingly perfect family.

An unnamed, never-described 16-year-old has been hiding all his life. He explains from the start, “Real hiding happens when everybody can see you, but they don’t notice you.” In this unconventional thriller, the teen tells readers directly all that he’s noticed lately. It’s been three months since his ex-girlfriend, Laura, broke up with him. He says, “I know you think I’m crazy,” perhaps even a stalker, but he felt compelled one night to observe her wealthy home (in which he was never allowed while they dated). When he sees a basement window left open, the teen seizes the opportunity to be closer to Laura. Once inside, though, he becomes trapped when the alarm system is turned on and discovers that Laura had been hiding her true self from him. Despite the danger, the teen makes it his mission to piece together the real Laura. Reminiscent of The Catcher in the Rye’s Holden Caulfield, the teen is an unreliable narrator whose thoughts often drift back to previous events of sexual awakening, a friend’s false identity, and his own feelings of not fitting in. Readers will often wonder if he is unwell—or the only voice of reason.

A taut thriller for thinkers who enjoy adventures of the mind. (Psychological thriller. 13-17)

A bit of an outsider, 16-year-old Danny Preston was devastated when his girlfriend, Laura, dumped him, claiming that he had no goals for the future. Despite the gulf between Danny’s lower-middle-class life and Laura’s privileged one, he thought they had something special together, that it might even be love. Danny describes himself as “good at hiding,” standing so still that eyes skip right over him, and he puts that skill to good use when he climbs through the basement window of Laura’s house. A consummate observer, Danny wanders through Laura’s empty, immaculate home after the family leaves for the day, reflecting on the relationship and discovering how little he really knew her. Danny’s loose, rambling narrative reveals a relatably flawed teen whose broken heart paves the way to a search for answers and understanding. A few startling revelations in the last act highlight Edgar nominee Turner’s talent for misdirection. This tense tale is a haunting meditation on self-acceptance and self-realization, and love found and lost. Ages 12–up.

Ever wonder what goes on behind the gates, shuttered windows, and locked doors of the neighbors? What really happens when no one is watching or listening to those strained family dynamics that most people would rather keep hidden? When a quiet young man gives in to the temptation to slip unnoticed into his former girlfriend’s house one night only to be trapped by the alarm system, his act of trespass opens his eyes and ears to things he had not thought possible of such a perfect family and leads him to a decision he had never dreamed he would have to make.

For many young adults, to see and be seen is integral to knowing and being known. Creating and maintaining a virtual presence is of utmost importance and must not be ignored or left to chance. Yet not all teens yearn for their “fifteen minutes of fame.” For Laura, a beautiful gymnast from the upper class, and a shy, self-possessed skateboarder from the working class, to be seen or known by others is the last thing either of them want.

Through his first-person account, the protagonist (whose name is not divulged until he finally deems his listeners and himself ready for identification), invisibility, or hiding, is the super power that enables him to navigate incognito the concentric worlds of neighborhood, school, home, and friendship while he runs the gamut of emotions that first love evokes. His whispered thoughts track his journey through these circles of inner and outer self as though he were captioning his life in a film. The narrator himself is seldom on the set, but his essence is echoed in the voices of his divorced and distant parents. His odd, loser pal, Carol, is another candidate for invisibility, not by design but through lack of others’ patience with his perpetual hyperbolic lies. His like-minded first real friend, Suzie, nearly brings the narrator’s features to light when they discover through shared interests no need to hide their true selves behind the usual masks of empty teen stereotypes. It is the lovely Laura, however, his first true love, who unmasks them both. A slow, measured, surprising revelation of the power of love, this book is a treasure worth the wait for the final unveiling.

The unnamed sixteen-year-old narrator is a self-proclaimed expert at hiding in plain sight, so he's surprised when a beautiful girl, Laura, notices him at a party. They start dating, but she hides him too, so he never sees the inside of her ostentatiously expensive house, clearly a step up from the middle-class home he shares with his depressed dad. When Laura breaks up with him, he sneaks into her house and realizes he never really saw the real, broken Laura and that she was as good at hiding as he. The direct address and questioning ruminations of this twenty-first century Holden Caulfield cover similar ground as those of his literary ancestor as he tries to figure out how relationships work and why they fail. He gives special emphasis to how differences in economic class enable and even enforce varied levels of display and hiding, and careful readers will note that his relationship with Laura seems to have foundered for the same reasons as his parents' marriage—an aspirational woman disappointed in a less-than-ambitious man. The teens' case is more complex, however, given that the aspirations come from Laura's parents rather than Laura herself, leaving both her and the narrator victims in their wake. Like Holden, the narrator is unreliable, but the twist at the end comes more as confirmation than surprise. Give this to thoughtful readers ready to ask some unsettling questions about their own social positions and relationships. KC

Beyond The Bio: Henry Turner

96.5 KOIT About the Author - Henry Turner