Beyond The Bio: Henry Turner

Hey guys, it's Amira! I’m joined today by Henry Turner, whose new YA thriller Hiding is guaranteed to take you on a wild ride. It’s the story of a teenage boy who excels at being unseen and hides out in his ex-girlfriend’s house. It will be coming out this Tuesday, so keep a lookout at your local bookstore. Be sure to stick around to the end of the interview to find out how you can win one of five copies of the book. Let’s get to the interview!

View the Original Article at Pickmyya

Amira: Where did you get the idea for Hiding?

Henry: I had been working on a number of other book ideas, but always on my mind was the thought of writing a book about a real teen who thinks like a teen, not an adult in disguise. I wanted to write something immediate and relevant to the time when emotions are so strong and the future seems so long and unknown. Following this, I wanted Danny’s personality to be as important as the plot – that it’s not so much about what he sees and experiences, but how he feels about everything and how it all draws him closer to greater honesty with himself that was most vital to me in thinking it over and writing it. Danny’s personality is just as important as the plot, and they have a complimentary, developmental relationship to each other.

Amira: Do you see any similarities between Danny and yourself?

Henry: As a teen, yes. Danny is sort of on the fence about his opinions and impressions. He has definite opinions and impressions, but like everything else he does, he hides them, because he wants to keep his options open, especially about what he should do with his life. Like a lot of teens, like a lot of people in general, he wants to have a great life, but he’s very conscious that he doesn’t want to make certain compromises. It’s like, what if there was a group of people who seem to have great lives and lots of cool experiences, but to be with them, it would be necessary to think and act like them? What if this meant having to repress your real self?

The neighborhood I grew up in was a lot like that – about clothes, who was cool, who wasn’t, what the right things to like were, etc., etc. As a loner, you could see these groups of kids seeming to lead blissful lives, but on closer examination it was not really true, especially after getting to know some of them and hearing their stories. But even after that, there was still a desire to conform – or not conform – a conflict that’s ongoing and never fully resolved. Despite what people might want to think, life is full of irresolvable conflicts that never go away, and have to be adapted to the best way one can manage. As Samuel Beckett said, “I can’t go on; I’ll go on.”

Amira: How did writing this book impact you? I felt the need to lift up my lid and be open with others. Did you have the same experience?

Henry: I really tried to think like a teen when I wrote it. I tried to cut off access to the adult conclusions I’ve come to, so Danny wouldn’t just be a mouth piece for a bunch of foregone conclusions lurking behind what he says and thinks. And I hope I succeeded. I gave the book to an adult to read, and she liked it, but I could tell it really bugged her. And she said, “I couldn’t stand being trapped in a teenager’s mind.” I understood. Being Danny for a while had taken away all the defenses and crutches she’d built up over the years. She was stripped of her normal way of dealing with life and processing what happens. She was again a person at the starting line, looking out at an unknown future, trying to stay positive but filled with doubts. That’s how I felt when writing it.

And yes, I too wanted to lift the lid, but I’m aware of the consequences. To really lift the lid and be open with others involves a risk, even a loss of security and sense of safety. The French writer Andre Malraux said, “Man is not what he thinks he is; he is what he hides.” Danny makes a declaration of absolute love at the end of the book, and it is a painful revelation that is hard to witness. What he says to Laura strips him of all pretense, and that is a terribly revealing place to go to, without any shield. But it is only by doing this that Danny and Laura are set free to truly be themselves.

Amira: Towards the end of the book, there was a big reveal that had me very surprised. I was honestly in shock after reading. Did you plan the ending of the book before you started writing, or did this idea come to you as you were writing?

Henry: I had an idea of the ending that became clearer as I wrote. To tell the truth, it seemed really audacious to me at first, but the more I thought about it, the more I thought it fit perfectly. It’s a reality in the story, but also a metaphor, another of the many definitions the book gives for hiding. 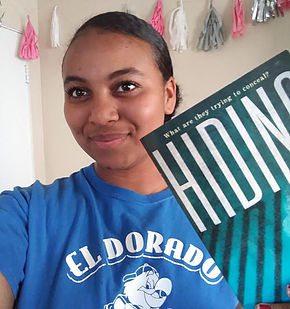 Amira: I am sixteen, and I want to be an author one day. Tell us about sixteen-year-old Henry. What were you like as a teenager?

Henry: Sixteen was the most mixed-up year of my life. My dad remarried and all of sudden we went from living in isolation to having my stepmother and her eight kids in the house, all of them of different ages (from twelve to thirty) and social backgrounds, from streetwise to college-bound. Trying to do well at school, trying to work at the jobs I had at the time, everything was impossible to separate from what was happening at home. My home life followed me everywhere, because it never felt settled or resolved. I dedicated myself to art when I was sixteen, because, I guess, it was the only thing I felt I could control. Everything else- home, school, social life- was all so chaotic that I needed the anchor that making up films and stories gave me.

Amira: Do you have any advice for myself and other aspiring authors?

Henry: The hardest thing to do is focus on your work and do it. The next hardest thing is accepting what you are capable of doing, which is something you have to do if you want to move forward. It’s a lot like lifting the lid, because you might not always be happy with what’s revealed. Be careful who you show your work to, make sure they can be trusted for an honest reaction, and when you read it yourself, don’t just decide it all sucks. You have to find what’s good and build on that, and keep building. That’s how you’ll find a style that’s absolutely unique to you, because the style has come from the growth of your work. You’ll know if you love to write, and are compelled to write. Adding focus and the ability to learn from your own work will give you an unstoppable forward motion. And if you can find a real mentor, a writer who can give real advice and criticism, that’s priceless.

Amira: What other projects do you have in the works, Henry? Anything you can tell us about your next book?

Henry: I have the beginnings of two YA novels: one’s comic, and the other is more suspenseful. Which one I’ll finish first is still a mystery to me.

That’s it for today’s interview with Henry, but don’t leave just yet! Click on the image below, and you can enter to win one of five copies of Hiding. And be sure to come back next week, when Daniela will be interviewing Makiia Lucier about her sweeping new historical fantasy Isle Of Blood And Stone.